The Minnie Mouse wardrobe is a lot less developed than I expected it to be so much of my wardrobe for our Easter week away is RTW rather than me made.

The leather jacket which I really want to wear but seem unable to start sewing is sitting patiently waiting for a courageous moment. Sewing in general over the last couple of months has been set aside for some compulsive stash tidying without really very much to show for it if I am being brutally honest.

Fortunately I have enough clothes in my wardrobe that a lack of sewing is not a disaster and I was able to put together a really effective travel wardrobe.

I took my Singer Featherweight and some sewing with me which added The Sewing Workshop's Ann's Cardigan to my week in Wellington wardrobe. Neither the Silhouette Patterns Lana's jeans in a wine coloured metallic linen nor the Silhouette Patterns Traditional blouse in Atelier Brunette black cotton double gauze were finished whilst away (or even since I have been back).

This selection of garments needed to last me fifteen days (eleven on holiday and four at work). Some garments were included for my work wardrobe and others only for play. The asterisked clothes/accessories went home in the suitcase with my beloved, at the end of our trip together. I only had what I needed for the week in Wellington in my carry-on (a Hedgren duffle bag) that has been part of my weekly commute for many years.


As it took me so long to write this post I have pictures of the travel wardrobe in operation over the fifteen days away. I greatly admire those bloggers like Fadanista and My Vintage Inspiration who manage to travel and blog at the same time.

The journey north started with an early morning flight to Wellington, where thanks to the late departure of the flight we missed our connection to Auckland and spent a fun filled couple of hours in Wellington airport. Once we finally arrived in Auckland the journey continued by car with a stop at Eutopia Cafe in Kaiwaka for a late lunch. More pictures of the Eutopia Cafe can be found here. 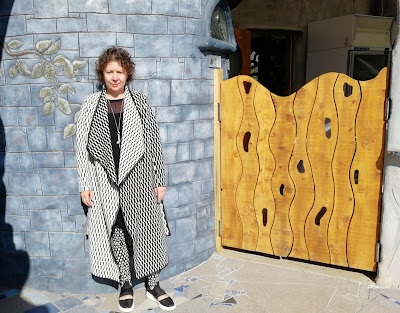 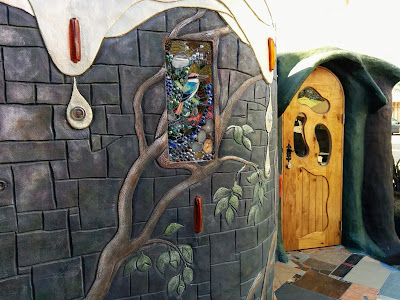 On Good Friday we travelled south down the west coast back to the Hokianga harbour, around some of the bays and home again, with lunch at the pub kitchen in Kohukohu - delicious steamed green lipped mussels.

The Papercut Patterns Bowline NY Circuit sweater made two years ago has never been worn as whilst I loved the idea of the sweater the finished product wasn't really me. I decided to give it one last chance to redeem itself and included it in my travel wardrobe. It isn't however my best look and it went into the donate pile after washing.

The Kohukohu footbridge is the first stone bridge built in New Zealand, and is the oldest surviving bridge of any construction still in existence in the country. It was built some time between 1843 and 1851 at the mouth of the Waihouuru Creek where it flowed into the Hokianga Harbour. As you can see from the drawing below the span of the bridge was much wider than today and closer to the harbour. The sawmill at Kohukohu created so much sawdust that land was reclaimed resulting in the bridge now being about 500 metres inland from the water's edge. 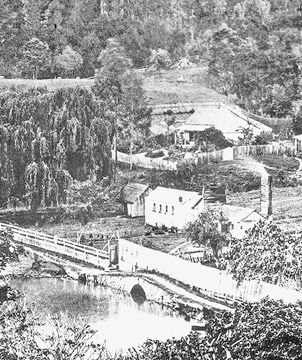 St Mary's Church Motuti is the final resting place of Bishop Pompallier, first Bishop of Auckland. He died in France in 1871, three years after his return from missionary work in New Zealand. He was particularly revered by the Māori people of Hokianga and during the 1990's there was a campaign for the return of the founding Catholic Bishop. In 2002 the campaign achieved success with the  re-interment of the Bishop’s coffin beneath the altar in St Mary’s Church, Motuti.

A very relaxing day with a trip to Kaitaia farmers market, then back to the bach for lunch and a lazy afternoon doing nothing, before making pizza for sharing at the Beach Abode pizza night. 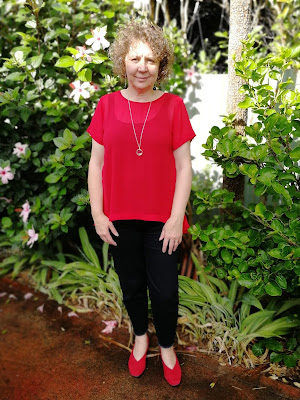 Another lazy day this time spent sewing after a walk up to the North Drift Cafe for morning coffee. 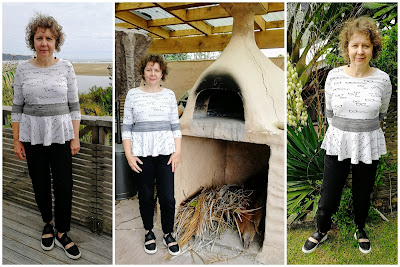 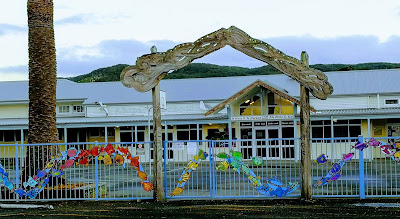 Love all these fishes swimming on the Ahipara school fence

A drive north to Cape Reinga.  Ahipara is at the bottom of 90 Mile Beach which stretches to Scott Point, five kilometres south of Cape Maria van Diemen. For those who are sticklers for the facts the beach is actually 88 kilometres long. As beaches in New Zealand are considered roads we could have driven along the sand, but it's really only suitable for 4WD vehicles and is safe to drive only at specific tide times. The big barrier for us is that rental car companies won’t allow their cars on the sand, mostly for safety reasons. We took the easy route and drove along the road.

Te Rerenga Wairua (Cape Reinga) is the most spiritually significant place for Māori. It is here that after death, all Māori spirits travel to the pohutukawa tree on the headland of Te Rerenga Wairua. They descend into the underworld (reinga) by sliding down a root into the sea below. The spirits then travel underwater to the Three Kings Islands where they climb out onto Ohaua, the highest point of the islands and bid their last farewell before returning to the land of their ancestors, Hawaiiki-A-Nui.


A drive down the East coast to Kerikeri where we had lunch at The Rusty Tractor (the best meal we had all week). Then on into Kerikeri to do a little retail therapy. We needed to replace the cafetière as my dearly beloved put his thumb through the bottom of the one we had (only a small gash in his thumb nothing to worry about), plus I needed to visit a sewing shop to buy some thread.

The day wasn't really photograph worthy being a bit overcast and drizzly so only an outfit of the day photo complete with rusty tractor. 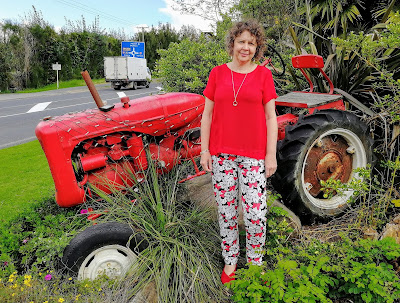 A brighter day and another drive down the east coast but only as far as Mangonui where we had lunch at the Little Kitchen, with a stop off at the Wild Nekta Cafe for morning tea and a pre-lunch morsel (deep fried Mars bar) at Cable Bay. After all that eating we had a walk along the beach at Taupo Bay. 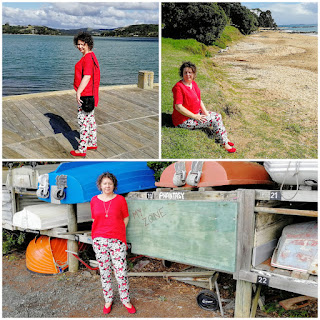 For me this was a stay at home day, as I had some work to do. At least the view was pleasant as I typed away on my laptop. 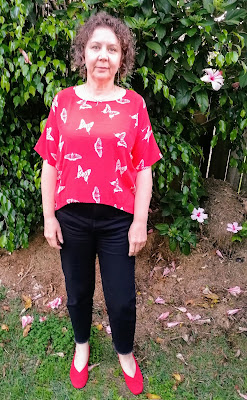 Morning coffee at Beach Box in Coopers Beach, followed by a drive down to Mangonui for lunch, a walk and back to Ahipara. Coffee and gelato at the Beach Box was excellent, not that I had a gelato of my own just a taste of my beloved's. 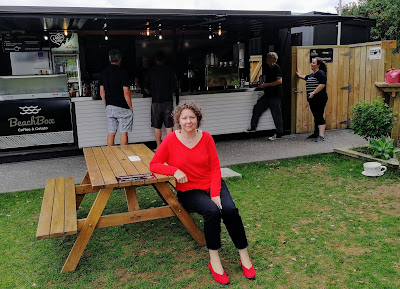 From the Waterfront cafe (lunch was pretty average and gave both of us chronic indigestion) we did a bit of the heritage walk, walking up Thomas Street, along St Andrew's walkway, down to the police station and back along the waterfront to the car.

Another visit to the Kaitaia farmers market and then a very long walk on Ahipara beach before a late lunch at the bach. 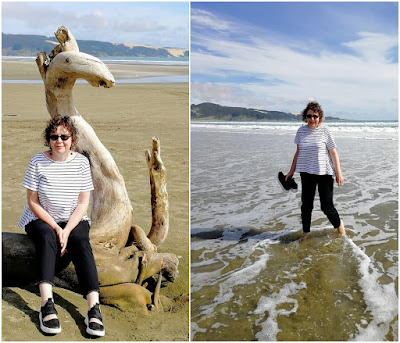 Driving back down to Auckland to catch an early evening flight to Wellington, with a stop for lunch at Bennetts cafe (they also make delicious chocolates) in Mangawhai. These self drafted leggings were whipped up on the Wednesday night before the trip as I got a bit obsessed about wearing them with the Moochi Label dress. However the Label dress resembled a sack when I tried it on (after the leggings were sewn) so it was substituted with the above dress.  One day the Label dress will be transformed into something more suitable. 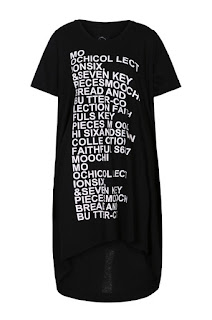 The return to reality and how harsh it was - selfies in the bathroom at work. Apart from Wednesday when I forgot so made a valiant attempt at an arty selfie back in the hotel room which was a complete fail - think I need longer arms. 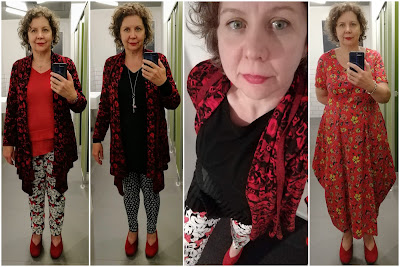 Google Photos kindly made a slide show, complete with music, of our ten days away in Northland.

Photo bombed by the neighbours cat 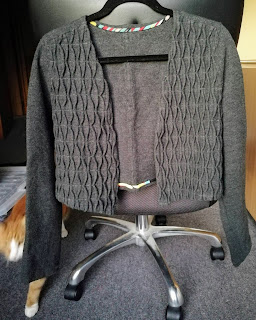